The positive vibe around 2018 got me to thinking about  the word vintage.  Its literal meaning  is the wine of a single year as opposed to a blend of various harvests. This is how we use it in the trade but, it also has a positive connotation as being applied to something of exceptional quality.  Largely this comes from wines like Champagne and Port where the regular products are blends and traditionally they only made wine from a single vintage in the really good years.  One thing that you do see is that when you get a really great vintage in one place, news spreads and people assume that it applies to all regions.
When I first started in the  business we were selling the truly wonderful 1982 Bordeaux  and on the back of it, demand for 1982 Burgundy increased despite them making pretty thin and dilute wines. In hot countries there is less variation in climate and so less variation between vintages and there’s a case for saying that due to global warming, the same is starting to happen in Europe. To take Bordeaux again,  the really great years came around about once or possibly twice a decade if you were lucky. Since the great 2000 they have had  05, 09,10,15,16 all being declared “Vintage of the Century” with some of the ones in-between also being pretty tasty (01,03,06, 14, 17).
A Vintage Year.
Our small world of English Wine Making is all a in bit of a quiver. Potentially we’re facing the best harvest for a long time, certainly since 2009 and perhaps one of the best ever in our short history. That being said, the last month is the most important and so there’s still a way to go until we get those precious grapes into the winery.  At a recent growers meeting we were all a bit flummoxed as to what to say to each other. Like all farmers, we like a good moan but nobody really had much to complain about.

Popular posts from this blog

Born to be Wild. Born to be wild.

In life, we all like to have a bit of control over things. That reassuring feeling that everything will go to plan and while nothing is ever guaranteed, you expect things to turn out well. In the winemaking world, this is what happens when you make your wine with a commercial cultured yeast. The vast majority of wine is now made using strains that are pretty predictable and will do the job quickly without too much risk. This being the case, why did we decide last year to go back to the wild side and let our grapes ferment with the natural yeasts to be found in the vineyard? The answer is that there is research that suggests that no two  vineyards have the same finger print and so you are tasting the unique product of our environment. The process was pretty nerve wracking. A commercial strain does its job in a week or two but our indigenous Somerset yeasts were still slowly working away until after Christmas. The results? We couldn’t be happier. We think that our newly …
Read more
December 10, 2018 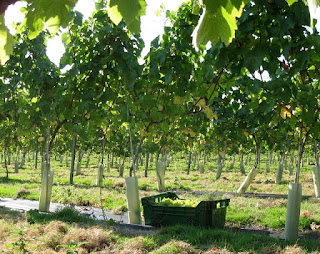 A Vintage Year Part 2. Those of you with memories that go back as far as last September will know that I wrote in The Leveller about the potential for the 2018 English harvest and I’m glad to say, it seems that potential has been realised. You are never quite sure how things will turn out until you taste the finished wine but, winemakers with much longer memories than me are saying that it’s the best harvest that they have known in this country. What makes it great is that we got quantity and quality, anybody that was here on harvest day will attest that the grapes tasted amazing with real intensity of flavour.  One question is, where will all this English wine go. The answer is that the big producers have been having to hold back on sales as they just haven’t had the stock and so this will allow them to grow both here and in particular, in North America which as a huge appetite for what we’re doing.  The futures bright and the future's fizzy! 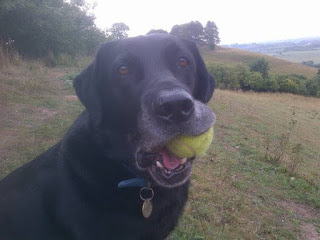 A Winemaker’s best friend.
Here we are in December and the year has flown by! It must be something to do with getting older as it seems like only weeks ago that we were planning our vineyard work and wine making for the year. It’s a nice time for us, the wine is safely in tank and the vineyard is  completely dormant and so we have winter pruning to look forward to in the new year but for now, it’s a chance to sit on the sofa in front of the fire. We do have one vital task though , recruiting a new vineyard dog.
Our dog Fred arrived one week before we planted the vineyard. He was just a year old and we were already his fourth owners. It wasn’t his fault, he was just a regular energetic young Labrador but through circumstance he was shuffled around between people and was completely untrained. Like all great dogs, he quickly became part of the family regularly entertaining visitors and stealing our thunder during vineyard tours. Sadly we lost him after a short illness in the summer and so…
Read more